Introduction to The Decline of Tradition

The famous anthropologist, Margaret Mead characterized it this way (Culture and Commitment, 1970). Tradition is a one-way flow of information from the older generation to the younger generation:

In Samoa Mead observed a smooth transmission of traditional culture whereas, in America, she saw what she called ‘the generation gap’ – teenagers rebelling and rejecting the cultural transmission. She thought that this was because circumstances had changed as a result of industrialization (eg. women having independent income). The culture being handed down was perceived by the younger generation as being out of date, old fashioned, an unwelcome imposition. She suggested that, in order to make sense of their world the young started a dialogue with one-another:

She speculated that when this dialoguing generation became parents they would dialogue with their children:

This would then have created a new form of culture, much better at adapting to changing circumstances than traditional culture:

Mead’s focus, as mine in these essays, was more on the process of tradition than its specific content, how culture is passed on to succeeding generations more than what is passed on. For example I reflect on the effects of the violence, inherent in enculturating children, regardless of whether the culture is European or Asian. Viewed from the perspective of dialogue, tradition is a monologue by the older generation. Traditional parents and teachers do not listen to the younger generation, are not open to feedback from them. (My father snapped, “Don’t answer back!”) This seems to have been the case in all the major civilizations, all hierarchical societies. Violence against children is only just beginning to be outlawed in the World. With Scandinavian countries leading the way, it is now illegal to hit one’s own children in 76 out of 232 countries (most laws introduced in the last 20 years).

In The Decline of Tradition I interweave stories of encounters with people on my travels in South Asia with reflections on the process and content of Indian tradition and on traditional process in general. I look at what must be common to all traditions in hierarchical societies: in effect the oppression and conditioning of the next generation. I reflect on the origins of tradition in oral, indigenous, non-hierarchical tribes and explore the possibilities of the formation of new types of culture as tradition declines everywhere. While this throws the World into chaos, is a culture of dialogue arising as an evolutionary response to global problems generated by industrial technology? 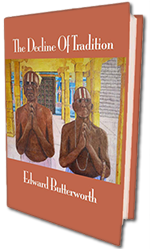